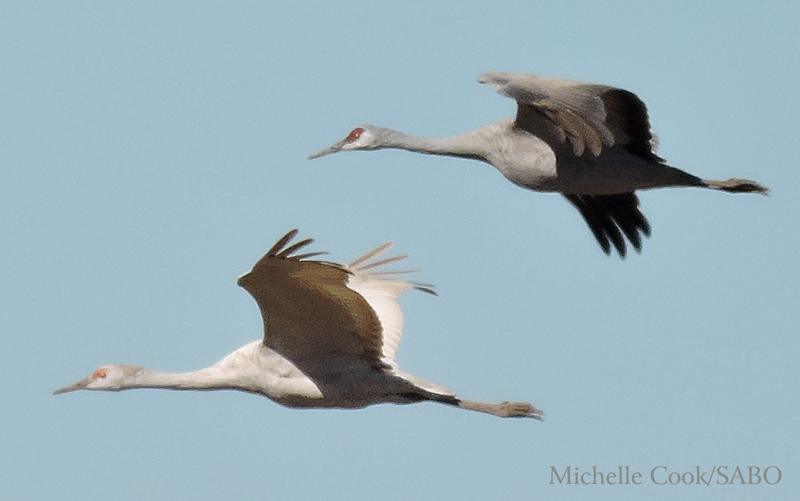 A very rare “pastel” Sandhill Crane is spending the winter at the Arizona Game and Fish Department’s Whitewater Draw Wildlife Area. This handsome mutant was spotted by SABO Director/Naturalist Tom Wood on January 31 during the flock’s midday fly-in and photographed by SABO member Michelle Cook.

Pigment abnormalities of any kind are seldom observed in Sandhill Cranes, affecting fewer than one in 200,000 individuals. This bird, which we’re calling “Pearl,” sports very pale plumage, a condition known as dilution. Both eumelanin, the pigment responsible for blacks, grays, and dull browns, and the red-brown pigment pheomelanin are present but at greatly reduced concentrations, a form of dilution called “pastel.” “Pearl’s” bill and legs are also paler than those of a normal crane, which is typical for dilute birds. On its forehead, some pale orange skin shows through pale beige juvenile feathers. The red skin color of adults is created by carotenoid pigments unaffected by dilution mutations, so “Pearl” should have a normal-looking red forehead if it survives to adulthood. 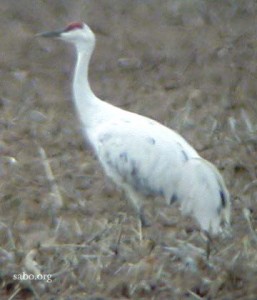 Archive digiscope photo of “Moby,” a “pied” Sandhill Crane that spent the winter of 2003-2004 in the southern Sulphur Springs Valley. Its condition is more likely to be the result of progressive graying than partial leucism.

An odd-colored adult Sandhill Crane that spent the winter of 2003-2004 at Whitewater Draw Wildlife Area, dubbed “Moby” by SABO staff, had mostly white plumage with scattered normal and gray-shaded feathers and normally pigmented eyes, bill, legs, and forehead. A pattern like this is consistent with a common but mysterious condition called “progressive graying.” Affected birds appear normal in their early years of life but acquire white feathers with age, sometimes becoming mostly or entirely white. Extreme cases may ultimately affect the skin, bill, and legs as well. This condition may be related to the human pigment disorder vitiligo or simply represent an avian version of gray hairs.

With rare exceptions, progressive graying is nearly indistinguishable from leucism* (pronounced with a hard “c”), a relatively rare condition characterized by pure white feathers either in patches among normal ones or over the entire body. Affected birds with no normal feathers (total leucism) usually have unpigmented skin, bills, and legs and are distinguished from true albinos only by their normally colored eyes. Partially leucistic birds have patches of pure white feathers among normal ones, often in nearly symmetrical patterns, and skin that may be normal or patchily pigmented. Albinism is an extreme condition in which affected animals produce no melanin pigment at all; though you often see the term used informally, there is really no such thing as “partial” albinism.

The reduced melanin may make “Pearl” more vulnerable to sunburn and feather wear as well as more conspicuous to predators. Nevertheless, we have high hopes that this remarkable bird will survive to winter with us again.

For more on pigment abnormalities in birds, see:

Many thanks to Michelle Cook for documenting this rarity and allowing us to use her photo to illustrate this post! If you are lucky enough to see and photograph “Pearl” and would be willing to allow SABO to use your photos in our education and outreach programs, please contact us.

* “Leucism” has a long history of misuse as a catch-all term for any reduction in pigment.