A banded Black-chinned Hummingbird stands on her “launchpad.”

The lush, green ribbon of the San Pedro River provides vital habitat for both resident hummingbirds and migrants traveling between wintering sites in Mexico and breeding grounds as far north as western Canada and southeastern Alaska. The public is invited to get a close-up look at these tiny travelers as staff and volunteers from the Southeastern Arizona Bird Observatory capture, band, weigh, measure, and release them as part of long-term studies of the birdlife of this vital migration route. Our main banding station is located at the San Pedro House visitor center of the San Pedro Riparian National Conservation Area, 9800 E. Highway 90, Sierra Vista, AZ (7 miles east of Sierra Vista on Highway 90; see our Activities Map). The public is welcome to observe banding sessions at no charge, but donations are gratefully accepted.

Due to hummingbirds’ migratory patterns, the highest capture rates are generally during the peaks of spring and fall migration, mid-April through mid-May and late July through mid-September. Dates for banding sessions, workshops, and other activities are listed in SABO’s Calendar of Events.

Banding, also known as ringing, is one of the best tools we have to help us understand the lives and travels of birds. By using numbered bands to identify individual birds, we can learn much about life span, reproductive cycles, timing and routes of migration, and the importance of particular nesting, wintering, and migration stopover sites. 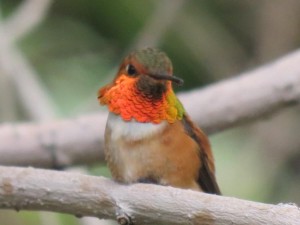 Rufous Hummingbirds are common migrants along the San Pedro River as they travel between their wintering grounds in Mexico and breeding grounds as far north as southeastern Alaska.

Banding studies can act as a diagnostic tool for the health of bird populations which in turn may reflect the general health of the environment. Banding is particularly useful in studying highly migratory species, which include most of the hummingbird species found in the United States and Canada. Much of what we know about hummingbird migration comes from banding. For example, each spring and fall some Rufous Hummingbirds must migrate at least 2700 miles between their nesting and wintering grounds; long-term banding studies show that they tend to follow the same routes and arrive at stopover sites within a few days of the same date each year.

Because native birds are protected by the Migratory Bird Treaty Act, federal permits are required for activities such as banding that involve the capture and handling of wild birds. The Bird Banding Laboratory, a branch of the U.S. Geological Survey, issues banding permits and distributes bands of many sizes and types to approximately 4000 master bird banders and subpermitees in the United States, only about 200 of whom are permitted to band hummingbirds. SABO’s banding studies are conducted by professional biologists and trained volunteers working under state and federal permits.

The question most often asked about hummingbird banding is “How do you capture and band such a small bird?” The answer is, of course, “Very carefully!” Hummingbirds are actually easier subjects for banding than most larger birds. They are not dangerous to handle like birds of prey, herons, cardinals, and other well-armed species, and they do not have long, fragile legs like shorebirds and many songbirds. They are also fierce and intelligent, which minimizes stress from capture and handling. Nevertheless, it takes special skills and knowledge to ensure their safety. 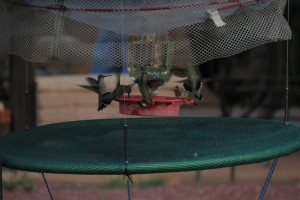 Hummingbirds inside a remote-controlled “bonnet” trap.

The standard equipment for bird banders is the mist net, a fine nylon mesh suspended loosely between thicker supporting lines to form pockets. Typically, the mist net is stretched flat between two poles, and birds fly into the nearly invisible mesh and fall into a fold of loose netting where they are trapped. Hummingbirds, however, are seldom captured this way. These intelligent and maneuverable birds will see the net before impact, stop, and fly over, under, or around it. To outwit such savvy and resourceful creatures, SABO naturalists use traps baited with feeders. The traps are monitored constantly, and when a bird visits the feeder a release mechanism is triggered to drop a curtain or lower a door. Even these methods are far from foolproof; some birds manage to escape before capture, while others simply avoid the traps altogether. 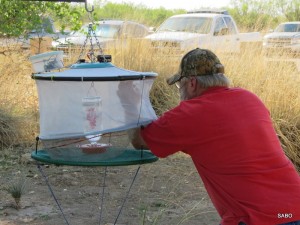 A banding team member gently extracts a bird from the remote-controlled “bonnet” trap.

Extracting the birds from the trap and transferring them to holding cages requires a delicate touch. Though hummingbirds are actually tougher in some respects than many larger birds, their small size makes them vulnerable to injury from careless or inexperienced handling. New members of SABO’s banding team undergo weeks of orientation and training before taking on the responsibility of handing birds.

Once extracted from the trap, each bird is transferred to a soft mesh holding cage and carried to the banding table where it is checked to see if it is already wearing a band. Each “new” (unbanded) bird receives a band marked with a unique number which will be recorded in a database at the Bird Banding Laboratory in Laurel, Maryland. A hummingbird band on a penny.

Most bird bands come preformed from heavy-gauge aluminum and embossed with letters and numbers; even the smallest and lightest of these would be far too large and heavy for a hummingbird. Instead, hummingbirds receive special bands made from sheets of soft aluminum alloy only about the thickness of a business card. The unique number codes for a series of 100 bands are anodized (printed) onto the metal sheet, along with lines to guide the trimming of the bands. This sheet is sent to the bander, who must use a custom set of tools to cut out each band, trim it to size, smooth all the edges, and form it into a tiny ring. Great care must be taken in making each band to ensure that the bird can wear it for life without injury or interference with its behavior. Some wild hummingbirds have worn bands for more than 10 years with no apparent problems. 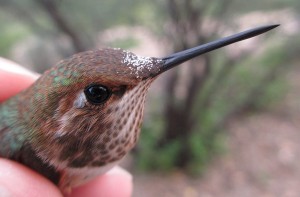 The forehead of a young Rufous Hummingbird carries a thick layer of pollen, probably from a native red morning-glory.

The band is applied to the bird’s “leg” (actually the tarsus, equivalent to the long bones in our feet) using specially made pliers. The fit is checked, then the bird’s vital statistics are recorded: species, age, sex, lengths of the wing, tail, and bill, weight, plumage condition, molt (loss and replacement of feathers), amount of visible fat (an indicator of general health and migratory status), pollen color and location (if visible), signs of impending or recent egg-laying in adult females, and any peculiarities such as parasites, odd-colored feathers, or scars. Pollen may be collected for later identification to help us understand what natural resources the birds depend on during migration and nesting. 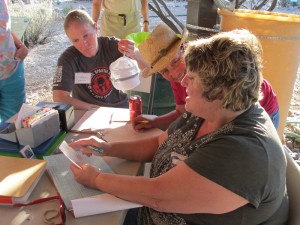 Birds already wearing bands don’t get another one; instead, their original band numbers are recorded along with all of the other data collected from new birds. Though the vast majority of recaptured birds were originally banded at the same location, these reencounters (up to five in one season) help us track the migration schedules, reproductive cycles, and longevity of individual birds. The oldest individual in the San Pedro study so far is a female Black-chinned that was at least 10 years old in 2006, making her one of the oldest documented hummingbirds in North America. 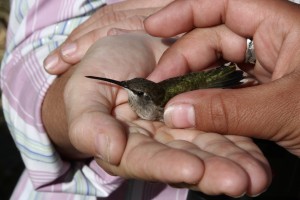 After all the data is collected and the bird has been offered a drink, a member of the banding team places it in a friendly hand for release.

As a final step, a few photos may be in order to document rare or difficult-to-identify species or unusual plumages or provide new material for SABO’s educational efforts to the general public and the hummingbird banding community. Once all documentation is complete, which rarely takes more than two to three minutes, the bird is offered a sip of sugar water and placed in a waiting hand for release. Some birds fly off immediately, while others may sit quietly for several minutes before departing

Though a few hummingbirds are year-round residents of southeastern Arizona and others arrive as early as late February, banding on the San Pedro River begins as migrants begin arriving in late March. Spring migration peaks in late April and early May, but the real show starts after the summer rains begin to fall in July. Resident hummingbirds such as Black-chinned mingle with southbound Rufous arriving from nesting grounds as far north as Alaska and “Mexican” species such as Violet-crowned. Up to 30 hummingbirds may be banded during a single 2-hour session during the height of fall migration in late August. The number of birds passing through begins to drop by mid-September, and by early October only a few are left and the traps are put away to await their return in spring.